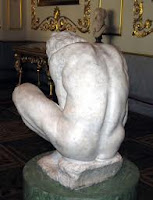 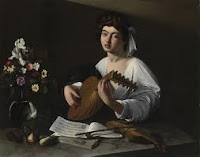 From the People’s Palaces of the Moscow Metro to the massive and opulent Baroque style Winter Palace of the Tsars’ in St Petersburg, which now houses the Hermitage art collection, the royal excess here is so over the top it’s no wonder they had a revolution. The building itself was started by Peter the Great, the founder of the city of St Petersburg itself, to rival Versailles, but really finished by his daughter Elizabeth, and continued by Catherine the Great, and is now a fantastic collection of such quality and quantity that it is impossible to appreciate it all fully.

After the Russian Revolution the Soviet regime appropriated the private collections of nobles and rich Russian citizens to add to their collection. It is surprising in a way that all this art and opulence survived the revolution and subsequent Soviet era, but Lenin insisted that all the treasures now belonged to all of the people, and implored them to leave them for the pleasure of the ordinary Soviet citizens to enjoy – and luckily for us, they did.

Apart from the beauty and splendour of the Palace itself, there are works here by almost every Grand Master you care to think of. It really is a dizzying display of beauty and creativity. It is hard to pick out favourites from such a collection, but I do have some. The unfinished sculpture of ‘The Crouching Boy’ by Michelangelo is the only piece of his work in Russia. And although still unformed in places, the way his chisel captures the sinews and muscles in the boy’s frame is remarkable.

‘The Lute Player’ by Caravaggio is also startlingly beautiful, surprisingly one of three versions of the same work by the artist in the world, and thought to portray one of the castrati singers from the Sistine Chapel. Of the two prized depictions of the Madonna and Child here by Leonardo da Vinci, my favourite is the Benoir Madonna, named after the architect who previously owned the painting, and a great example of early Renaissance art.

There is a whole room full of Rembrandts, including ‘Danaë’ which was infamously vandalised by a mentally ill man with acid and a knife in 1985. It can now be seen, showing remarkably few scars, after twelve years of painstaking restoration.

The French Impressionists get a whole suite of thirteen rooms dedicated to them, moving through Monet, Renoir, Degas, Cézanne, van Gough, Gauguin, Picasso and Matisse. It really is a sight to behold, and it’s hard to do justice to them in a meaningful way on a short visit. But if you get the chance, I urge you to visit the Hermitage, to wonder at the opulence and splendour of its buildings, but more than that, to see some very special works of art, even if you don’t have chance to take it all in.

Posted by Julia at 11:28 No comments: Links to this post 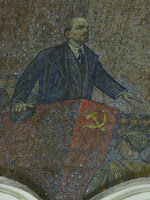 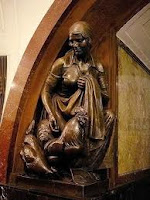 It may seem odd to have my best cultural experience in Moscow deep underground in its metro system, but this efficient and very busy system of transport also happens to house spectacular ‘people’s palaces’ of art to rival anything else on display in the city.

Not all the metro stations are treasure troves, but many of those built in the 1930’s and 40’s are hidden gems beyond belief. The Ploshchad Revolyutsii (Revolution Square) station has impressive bronze statues of ordinary Soviet citizens doing their bit for the cause, and soldiers, peasants, and engineers are all represented. Muscovites are quite superstitious, and they believe that rubbing the nose of the dog featured in one of the sculptures will bring them good luck, so you can see just how shiny and sparkling they would all have been when first erected by the cleanly rubbed animal’s features. And many other stations have equally impressive but utterly different offerings.

Such beauty coming from a regime that was also guilty of such atrocities is startling. The art in the metro stations depicts the Soviet system, its leaders, and their battle against Hitler. It was also a very efficient way of distributing the propaganda of the age, but if you just take a trip and get off at random stations, you will be amazed and suitably impressed by beautiful chandeliers, marble, and mosaics. They truly are underground palaces, and well worth braving the mysteries of the Moscow Metro, which doesn’t have any translations from the cyrillic alphabet so it can be a bit tricky. It sure beats the London Underground.

Posted by Julia at 10:24 No comments: Links to this post

Books - Anatomy of a Disappearance - by Hisham Matar

Hisham Matar’s background has a particular resonance at the moment, with the momentous and violent events taking place in Libya. His father was a political dissident opposed the Gaddafi regime, and the family were forced to flee their home and went to live in Egypt. It was from Cairo that his father was abducted, never to be seen again by Matar, although he was reported to be imprisoned in a notorious Libyan jail.

And his latest novel ‘Anatomy of a Disappearance’ is a moving piece of writing that draws heavily on this personal experience of loss. It is a relatively short book, at less than 250 pages, but is densely packed with emotion, desire, and desperation. It is beautifully written as it explores the relationship between Nuri, a young boy, his father Kamal, and new girlfriend Mona. It is fourteen year old Nuri who spots Mona first, by a hotel pool whilst on holiday, and he gallantly and confidently helps her to take a thorn out of her foot. She is much younger than Kamal, but nevertheless becomes his partner, but Nuri cannot repress the strong feelings that he had and continues to have for her, with inevitable consequences.

His wealthy and privileged upbringing, despite the loss of his beloved mother, is the backdrop to this tale, played out surrounded by other strong female characters like his long devoted servant Naima. He is sent away to an English boarding school at Mona’s insistence, and from here has to suffer the wrench of his father’s disappearance. Kamal’s political views and actions are not clearly spelt out, but the inference about them leading to his loss of liberty is made clear.

Matar writes in a sensitive and moving way, and tells a rich and multi layered story which is simple, but with many complexities beneath its obvious themes. It deserves to be read for its considerable merits, but also as a stark reminder of the human loss behind such brutal dictatorships.

Posted by Julia at 22:45 No comments: Links to this post

Books - When God was a Rabbit - Sarah Winman

I love the joy of devouring a book at almost a single sitting, and this first novel by Sarah Winman was certainly one that is hard to put down. It is in two distinctly different but related parts in the life of a girl called Ellie. The first is told from her point of view as a child growing up in the 1970’s in Essex, then in Cornwall, after her family relocate there. Wiseman uses the voice of Ellie as her narrator very authentically and effectively, in a way that is reminiscent of Mark Haddon’s ‘The Curious Incident of the Dog in the Night-Time’.

Her friendship with Jenny Penny, who stick together almost like two social rejects, is very touching. As is her relationship with her pet rabbit, which she controversially, at least for some, calls God. Terrible thing happens to Ellie when she is nearly 6 years old, they are only implied but clear enough, but they are not discussed in the family at all– although they could surely have guessed at what had happened to her. She shares the secret only with her beloved brother Joe. It seems strange for the family not to have been able to be open about some things as they were about others, they are, for example, very open about lots of other things including sexuality and religion, being as they are children of the 60’s. Maybe that is just the way some families are, not everything is discussed, things are left hanging there.

The second half of the book sees Ellie as an adult, but still the events and characters of her childhood shape and haunt her. Her close relationship with her brother is one of the central themes, and the effect it has on Ellie when it is destabilised by tragic events.

At times the novel is hilariously funny, as where a young and precocious Ellie auditions for the school Nativity play in her actress aunt’s sunglasses to look more glamorous, and shocks the teachers by her inappropriate language. At other times it is totally sad and moving. But it is always completely engaging.

Just to nit pick slightly, there are perhaps a few too many themes and events in the book – so that it sometimes feels like a bit of a patchwork quilt. And the prediction of the events of 9/11 via tarot cards seems a bit clumsy. But this is an amazing first novel, with wonderful descriptive qualities, and great characterisation. Sarah Winman is certainly a very talented writer, and if this book is anything to go by, her future efforts will certainly be something to look forward to and to savour, at a single sitting or otherwise.