Just taking a break from blogging for a while - have fun!
Posted by Julia at 10:54 No comments: Links to this post

It's always a worry when a successful and hilarious small screen comedy transfers to a film version. But when the project involves the likes of comedy genius Armando Iannucci, and indeed Steve Coogan himself, there is really no need for anxiety. Coogan successfully invokes the full cringe worthy horror of the cheesy Norfolk radio DJ in this extremely entertaining film.

He is full of the usual quips and nonsense that we have come to expect and love about Alan Partridge, including some gems about religion. When a co-host has a laugh at the expense of Islam, Partridge is horrified and tells him that he must never make jokes about Muslims, 'only Christians - and Jews a little bit.'. Coogan embraces the full naffness that is Partridge so well - crooning and pouting along to Roachford in his car, complete with tan leather driving gloves.

When a new company take over the station, and care more about profits than the old time DJs, then the rebranding situation boils over into an hilarious siege, with Partridge as the unlikely hero of the hour. He plays this out for full effect, sensing something of a career renaissance as the likely outcome. His faithful PA Lynn is there to support and admonish him in equal measure.

There is good support from Colm Meaney as fellow DJ Pat Farrell for whom things become all too much. And a hilarious gag about a chemical toilet. It's a joy to watch and a reminder that sometimes you don't have to change a winning formula,  just keep on doing it as well as this.

Posted by Julia at 22:01 No comments: Links to this post

Theatre - Too Clever By Half - Royal Exchange

Good comedy is all about perfect timing, sharp direction, and great writing. Luckily the current production of Russian playwright Alexandr Ostrovsky's Too Clever By Half at the Royal Exchange is blessed with all these and more.

Told By An Idiot interpret the classic 1860's black comedy with its biting satire on Russian society at that time as a farcical commentary on 1960's Moscow. It talks a little while to warm up, as many of the jokes depend on being built upon again and again throughout the piece. But the comical capers and genius touches (sick cast member? - I will say no more), soon warm up into an absolute side splitting delight.

Dyfan Dwyfor is superb as social climber Gloumov, a young man who will stop at nothing to achieve his desired ends. He is certainly an actor to watch, and his wooing scene in the first act with married older woman Kleopatra (Hayley Carmichael) is just one of the funniest and entertaining things I have seen for a long while. She also does unspeakably hilarious things with a big pair of frilly knickers later on.

In fact the whole cast are brilliant, and under the skilful direction of Paul Hunter, this revival really comes alive. The choice of accompanying music is Tarantinoesque in its aptness and precision - the love scene (with Gloumov in gold lamé jacket of course) is played out to the strains of Matt Monroe crooning Walk Away. And the Rolling Stones' Gimme Shelter is a recurring theme tune for the hilarious action.

It is certainly worth catching before its current run ends - and is a salutatory lesson in the perils of recording your opinions of others too honestly in a diary.

Posted by Julia at 21:34 No comments: Links to this post

For a confirmed urbanite like myself, I simply cannot imagine not living in a city, specifically Manchester of course, with all its energy and culture. But for the second summer running I have also learnt to appreciate some of the wild places of the Highlands and Islands of Scotland, where wildlife is abundant, people are scarce, and there's not a cinema or theatre in sight. It is absolutely comfort food for the soul, and a chance to recharge and renew via a connection with the spectacularly  beautiful nature that surrounds us if we care to look for it. 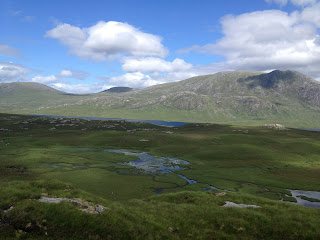 After the delights of Knoydart and the Small Isles last year, this time I ventured to Wester Ross on the west coast. and the Cairngorm mountains, again courtesy of Wilderness Scotland, via an amazingly quick flight to Inverness. And again the wildlife was all around, just on the drive from Inverness to our base in Gairloch we saw a red kite; a red deer; a raven; and an osprey nesting at the top of a pylon.  A 22km hike through the Fisherfield Forest was, luckily for my aching feet, rewarded with views over remote lochs and mountains which are unforgettable. The contrast between busy city life and the quiet contemplation which these Highland spots bring about is quite remarkable. The sight of a golden eagle soaring around one of the peaks to protect its young from the interlopers was majestic. And for some of the walk along the shores of Loch Maree we could truly have been in Tolkien Hobbit land it was so quaint. 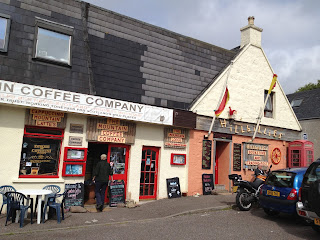 The coastal position of Wester Ross afforded glimpses, clouds permitting,  of the beautiful isles in the distance including Skye, reminding me of last year's adventures. And in this part of Scotland it is only a short drive from the coastline, with its harbour seals and cormorants, to the magnificent peaks of the Cairngorms. And how could I forget to mention the welcoming sight of Hillbillies in Strath on the journey. It's my ideal sort of shop in fact, selling books; huge slices of tasty homemade cakes; with the strains of Nashville music wafting through its comfy rooms. If I was to set up a business it would probably look something like this. An ideal combination. 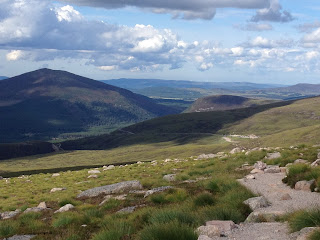 The feeling of standing on top of a mountain near Aviemore looking all around and for endless miles seeing only other mountain tops is quite a spiritual one. Our nearly 12km walk on the peaks took us via a hill with no name (bit thoughtless of whoever names these hills I think); up Stob Coire an t-Sneachda (1215m); and Cairn Lochan. And a distance bothy in a shower of highland rain is a very welcoming sight.

The influence of Queen Victoria's famed love of these parts is much in evidence, with some lovely villas and hotels around from that period. Aviemore itself is a bit busy for my tastes, coming from a city dweller that's a bit rich I know, but on my escapism trips I like to see as few people as possible and just enjoy the natural world and miles and miles of walking. And of course learn to appreciate the subtle differences between the various types of West Coast and Speyside whiskies on offer. The wild places in Scotland are really something special, but just don't tell too many people about them, I'd like to keep them that way.