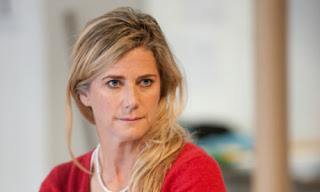 The latest play at the Royal Exchange is a fantastic archetypal one from Tennessee Williams - all smouldering passions and pent up tensions in a 1940s Deep South small town. A frustrated, lonely  and unhappy Lady Torrance has to live with her ailing elderly husband, whom she has never loved, whilst she dwells on her unfulfilled dreams. Into town comes sidling a young drifter with a snakeskin jacket and a guitar. And it proves of course to be an irresistible,  not to say combustible, combination.

Imogen Stubbs is fabulous as Lady - the outsider who rebels against the small town mentality of her fellow townsfolk. She last performed here in the brilliant Private Lives by Noel Coward, and in both productions she shows just what acting royalty she is - pure class. Luke Norris is also great as the young stranger who rides into town with a winning smile and charismatic words.

As with his other wonderful plays, such as A Streetcar Named Desire, Cat On A Hot Tin Roof, and The Glass Menagerie, this lesser known Tennessee Williams gem is full of smouldering tensions and prejudice, with its depiction of racism and intolerance of anyone who does not conform. And as a lesser known work, it was a real pleasure not to know the ending as the drama unfolded and the tension mounted - although it's title alone gives a clue to a less than ecstatic ending. It's a complex, brilliant play with many fascinating and absorbing themes, many of which are sadly still as relevant today as when the play was written.

A beautiful Blues guitar player accompanied many of the scene changes - a real treat. Director Sarah Frankcom has triumphed again after her fabulous A View From the Bridge here in 2011. This play is an absolute gem - tragic, passionate, and political. It is easily the best thing I have seen at any theatre so far this year - it truly mesmerised me, achieving as it does the holy trinity of wonderful writing, brilliant direction, and fabulous, simply fabulous, performances.

Posted by Julia at 09:39 No comments: Links to this post

Films - Beasts of the Southern Wild - directed by Benh Zeitlin 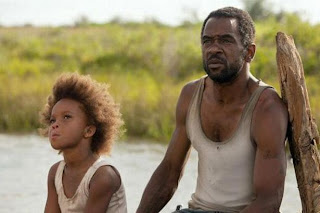 Debutant director Benh Zeitlin  has created a fantastical, tragic global warming/Hurricane Katrina influenced fable, with a dream like quality and a strong political message in his film Beasts of the Southern Wild, as told through the eyes of a child.

The New Orleans based story revolves around the central relationship of a little girl, Hushpuppy,  and her father, Wink, who are living in poverty in makeshift shacks on the wrong side of the levee. The authorities want to clear the place in the face of rising waters, but the strong community of drunks and hobos are fierce in their resolve to stick together, to look after each other, and to resist being put in some municipal shelter. Memories of the aftermath of Katrina are hard to fight back during the action, but this film is not just about that particular shameful episode in US history.

It is about pride, love, community, and survival. Terminally ill Wink is determined that his daughter will be able to look after herself in the cruel, harsh world they live in after he has gone. And it is fair to say that his parenting leaves a lot to be desired - left to bring her up alone after her mother left, he favours the 'cruel to be kind' methodology, despite his obvious paternal affection.

Much is being made of the brilliant acting by acting novices Quvenzhané Wallis and Dwight Henry in the central roles. And quite rightly so, Wallis especially - an amazing 6 years old at the time of the shoot - gives a mesmerising performance of range and depth. Youngest Best Actress Oscar winner ever? - don't bet against it. Their relationship is moving,  angry, and emotional in all the right places. The film does venture slightly into the realms of sentimentality towards the end, but overall it is a refreshing and confident work from Zeitlin, who owes more than a little debt to the wonderful Terrence Malick for this beautiful film.

Posted by Julia at 14:54 No comments: Links to this post 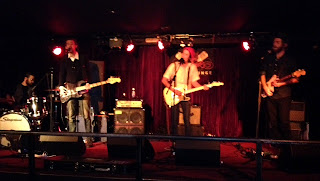 Joshua James is a talented musician from Utah, who, with his band, is on his first UK tour. It was an odd crowd who came out to see them at the Ruby Lounge - it has to be said. Many seemed content to talk in loud voices over the group rather than to listen to their music, and the lack of enthusiasm for an encore was very surprising, verging on rude.

But despite the indifference of a section of the  crowd, this was a very affecting and entertaining set from a clearly talented group. Joshua James himself is slight and slender, but his presence on stage is affecting and his songs heartfelt. They covered great tracks from their last CD Build Me This, such as Weeds, and the brilliant and powerful Coal Wars.

James did a beautiful solo acoustic version of Pink Floyd's Wish You Were Here. And they performed tracks from their new CD, out next month  - From The Top Of Willamette Mountain - which sounds well worth a listen.

His lyrics are sensitive and his voice clear and strong; his message confident and nuanced. Joshua James is a lot more than just another folkish singer songwriter. And the group of musicians he has assembled were a delight to listen to. Sorry again about the reception - Manchester - so much to answer for...

Posted by Julia at 00:09 No comments: Links to this post 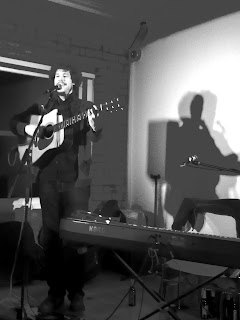 The Cornerhouse in Manchester is usually the sort of venue you associate with art house cinema, but it has hosted a beautiful, intimate gig with Canadian adoptee of our city, Gabriel Minnikin.

He treated the small but perfectly formed and certainly very appreciative audience to a wonderful set including the very best tracks from his latest CD Parakeets with Parasols . On this sweeping album, sumptuous tracks such as Arkansas and Halifax Blues are accompanied by a lush orchestra, but stripped down to just a guitar they are equally moving and exquisite.

Gabriel was charming and friendly as he recounted anecdotes about his friends, family, and even his recently departed family dog Casey (RIP). His velvet voice shone through lovely new songs too - with Blood Pedals and Birthday Card Eyes being particularly moving and heartfelt gems.


He generously shared his stage with talented support act Jo Rose. And as well as his own deep and beautiful material, he covered the heartbreaking  I'm still in love with you by Steve Earle., and the wonderfully humorous and ironic In Spite of Ourselves by John Prine and Iris DeMent. This was truly a treasure of an evening. More please...

Posted by Julia at 01:59 No comments: Links to this post