For modern fiction set in Victorian era England to be convincing, it has to effortlessly transport the reader to the Dickensian world we feel we are so familiar with, and this new novel by Carol Birch falls slightly short of succeeding in this mission. It is the tale of Jaffy Brown, who comes to the attention of Mr. Jamrach by bravely, or stupidly depending on your point of view, approaching a Bengal tiger in the streets of his native East End of London, in order to stroke its nose. Happily he is clutched from the jaws of death, literally in this case as the said tiger is preparing to swallow him, and lives on to become part of a seafaring expedition organised by Mr. Jamrach that will prove to be an even more testing experience for him.

Most of the book involves this ill fated voyage, where Jaffy and his fellow crew members discover hidden reserves of strength and endurance that they could not have imagined they possessed. But for me I couldn’t quite work out what the book was trying to achieve, or when I would get to the main point of the story. Possibly the historical construct Birch has cleverly created comes to dominate, when the story itself really should have stood out a bit more.

I wanted to like this book more than I did, which is a shame as Jaffy is certainly a likeable character who goes through a horrific and life changing experience. And I must mention the all too neat ending, which I felt was unnecessarily contrived to produce happiness where to let the horrors of Jaffy’s experience prevail would have probably been a sight more realistic.

Posted by Julia at 20:27 No comments: Links to this post

This Cold war espionage film is set in 1981 Moscow, before the collapse of the Soviet Union. Indeed, it is based on a true story that allegedly helped to lead to the fall of that mighty empire. But is it not your usual slick spy thriller, as the man who is unwittingly employed as the conduit for secrets to be leaked to the Americans is far from a professional spy.

Sergei Grigoriev, played by Emir Kusturica, who is usually directing rather than starring in films, is a KGB agent who has become disillusioned with the Soviet system, and longs for the freedoms offered to those in the West. He has fond memories of Paris from years before, and so hand picks French engineer Pierre (Guillame Canet) as the person who will smuggle his secrets out of Russia. Pierre is extremely reluctant to be any part of this plan, but grudgingly goes along with Sergei in the hope of a better way of life for the Soviet people. He is not a very good spy though, and there are moments of hilarity, as when top secret plans that Sergei has passed to him fly away into the street through their open car window.

Director Christian Carion manages to recreate the threatening tension of 1980s Moscow through this grainy film very well. And the personal cost to both men is a significant one, as their families become involved in the plot without their knowledge or agreement. The political point is a powerful one, as, without giving too much away, the Americans they are passing secrets too are finally exposed as having no more moral scruples than their Soviet counterparts.

But it sometimes feels as though the exposure of this political point is explored to the detriment of the personal stories involved here. So where the brilliant ‘Lives of Others’ totally succeeded in making a powerful argument via individual stories, ‘Farewell’ slightly falls short of doing either. But it is still an engaging, interesting and accomplished piece, and excitingly features David Soul as an aide to President Reagan. Or is that just me showing my age? Well it may not have the thrills and spills of Starsky and Hutch, but it is a thoughtful and original piece of film making all the same.

Posted by Julia at 19:50 No comments: Links to this post 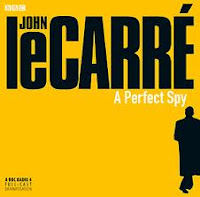 I am not the sort of person who can have more than one book on the go at a time. But with longer car journeys to work impending, I decided to give audio books a try, and specifically this 1993 Radio 4 adaptation of John Le Carré’s ‘A Perfect Spy’, and so can listen to one book whilst reading another, ok - not quite simultaneously, safe driving would not allow it, but as near as I can get to it anyway.

I haven’t read the classic spy novel itself, but this adaptation has all the hall marks of Le Carré at his best. Magnus Pym (played as the quintessential Englishman by James Fox) mysteriously disappears after his father’s death, triggering a hunt for him by his increasingly desperate wife Mary (Harriet Walter), and his own spymasters, which ultimately reveals his secret past.

The story is told partly in flashback, with the wonderful Julian Rhind-Tutt as the younger Magnus, who is enlisted into the secret service as an impressionable and eager young man. Magnus ends up being a master of manipulation, in espionage and romance alike. Magnus also reveals much of the story whilst being holed up in a remote Devon hideaway with a devoted landlady, who is blissfully oblivious to his exploits. Le Carré cleverly explores the themes of betrayal and betrayer, and the action is transposed to audio/radio in this wonderful adaptation by Rene Basilico.

Audio books will never replace the real thing for me – you can’t beat the feel of paper in your hand as you greedily turn over the next page (Kindle lovers please note) but as a substitute they come a close second, and this classic in particular is bound to drive listeners to the real thing for the full Le Carré experience.

Posted by Julia at 23:39 No comments: Links to this post

I haven’t been to the New Vic Theatre in Newcastle under Lyme for years, and in these testing times for the arts in general, and for so called ‘provincial’ theatre (as they like to refer to it in London anyway) in particular, I really wanted to love this production by the London Classic Theatre company.

‘After Miss Julie’ is a play by Patrick Marber which develops the nineteenth century play ‘Miss Julie’ by August Strindberg, and transposes it to an English country house on the eve of the election victory for the 1945 Labour Government. It is an intense three handed piece, which seeks to explore how class and social boundaries were being challenged. And to be positive the acting was first rate. Helen Barford begins the drama with what must surely be the longest solo performance whilst the audience are entering the theatre and finding their seats that I have ever seen. She certainly knows how to polish a glass. She plays Christine, the cook for the family, whose boyfriend John is the chauffeur. They were prevented from forging ahead with their wedding plans due to the war, or so Christine says. But as the action unfolds, John, impressively played by Andy Dowbiggin, and his roving eye tell a slightly different story.

The third character is Miss Julie, Kathryn Ritchie, who is fragile, shrill, and neurotic from the outset – possibly a touch too on the edge for the duration of her performance to be truly believable. She is shattered after a love that went wrong, and John is on hand to console, not to say seduce her. He has his eye on the main chance, and is prepared to risk all for the promise of a fortune and new life in New York.

Needless to say the plan does not come off. John is exposed for the bounder that he is, and Julie is left even more shattered than before. The play does contain moments of real tension, but these are not sustained for long enough. It’s a shame as the performances were great. The play, or at least possibly this production of it, was just not strong enough to live up to them and carry them through convincingly enough.

Posted by Julia at 22:31 No comments: Links to this post

Books - The Fates will Find their Way - by Hannah Pittard

This very original debut novel by Hannah Pittard is ostensibly about events in a small town American community following the disappearance of 16 year old year Nora Lindell one Halloween. But it is more about the subsequent lives of those who were close to her, the effect that her disappearance had on them, the imaginings of her friends about what might have happened to her, and their part in the tragedy. It is very well written and gripping in its psychological dissection of the motivations and guilty consciences of the boys who knew her well.

The effect of Nora’s absence and the imaginings about what could possibly have happened to her, as well as what subsequently becomes of her younger sister Sissy, become an unhealthy fixation for this circle of men as they progress into adulthood as Nora may not. Pittard writes the story along several cul-de-sacs, depending on which wild imaginings they are mentally constructing. This is a novel but very effective way to build up a narrative.

The book becomes something of a confessional as the young men mature and emotionally come to terms with what happened, or what they think probably happened, to Nora, and muses on the role their friends might have played. They are also forced, through their memories, to confront the reality of their own current relationships, marriages or loneliness, and in some cases all these things. It is clever, beautifully crafted, and very creative. The claustrophobia of the tight knit community oozes from its pages. Pittard, who has previously written short stories, has now proved herself as an accomplished novelist, and is definitely one to watch.