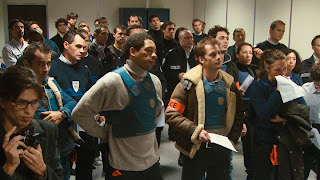 Whilst I totally accept that a film about the harsh realities of a Paris Police Child Protection Unit is never going to be light entertainment, I wasn’t really prepared for Maïwenn Le Besco’s perspective on this difficult subject matter.

Some of the acting is superb, with appearances from Nicholas Duvauchelle and Karole Rocher (better known as tough cops Theo and Roxane from the very entertaining but ultra violent police show Braquo). But the storylines they have to act out often feel like dead ends. The subject matter is difficult to watch at the best of times, but the film strikes an extremely dodgy note when it tries to make light of one young girl’s exploitation. What made it even more uncomfortable for me was that a significant number of the audience I was in seemed to find it hilarious in what felt to me a most inappropriate way.

There is a beautiful young woman photographer (played by the director Maïwenn herself) who is taking pictures of the unit’s work as an assignment. Her unhappy back story is mysteriously hinted at, half filled out, then left hanging in a confusing and unnecessary way. I’m not sure her character added anything to the story at all.

The police who work in the unit understandably have problems relating to the real world, and their various domestic relationships within it are something of a train wreck as a result of the horrors they have to deal with each day. But the plot feels like a mash up, with a seriously misjudged ending. This could have been an important and extraordinary film – instead it is just very unsettling.

Posted by Julia at 23:08 No comments: Links to this post

Books - The Colour of Milk by Nell Leyshon 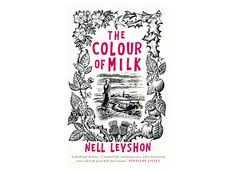 Fifteen year old Mary is an illiterate nineteenth century farm girl, whose life is changed when her indifferent and unloving father sells her into domestic service to the nearby vicar. Nell Leyshon captures her proud spirit brilliantly, and also manages to reflect the spirit of the age in her voice.

This is a very slender book, a novella in popular parlance, although just as long as a substantial short story, but that’s another debate. Mary’s fate is sealed from the first pages in terms of life chances and opportunities. But she is by no means a meek sort of girl; in fact her habit of speaking her mind often gets her into trouble. She knows this but stubbornly refuses to change in a marvellous ‘take me as you find me’ sort of way.

The vicarage opens up her eyes to a world of letters and books, and part of the joy of the writing is in Mary’s first steps on this voyage of literary discovery. Her close and warm relationship with her elderly grandfather, whom she misses dreadfully when she leaves home, is a joy, and one of the only pleasures in her hard life.

Ultimately the sadness of Mary’s situation is that she has no choices at all in the life she leads. She is potentially the victim of the men in her life, and of her poverty and class, although the way she is prepared to stand up for herself and to fight all comers makes for a wonderfully enjoyable short read.

Posted by Julia at 22:05 No comments: Links to this post 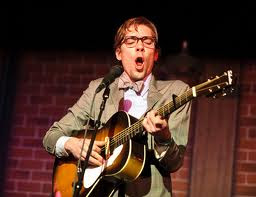 The latest tour from Justin Townes Earle was extremely eagerly anticipated (by me at least). I first saw him in January 2011 at the Deaf Institute and fair to say he blew me, and the rest of the small but incredibly lucky audience, away.This time around JTE was in a more pensive and down beat mood, less charming chats but the same fabulous musical quality nevertheless.

He bares his soul for all the world to see, and like the very best in the country music canon, has considerable heartache, not to mention addictions, to draw upon. His latest album Nothing's Gonna Change The Way You Feel About Me Now is more than upholding the very high musical standards he has set for himself. And we were treated to lots of brilliant tracks including Maria, Unfortunately Anna, and Look the Other Way. This last one is a particular gem and JTE recently performed it on the Letterman show in the States.

Many of his songs are rooted with a strong sense of place, like Christchurch Woman, about his time in New Zealand. He movingly dedicated it to the people of that currently devastated city in their efforts to get back on their feet after the earthquake. Or Harlem River Blues – always a high point of any JTE set, and he did not disappoint with it this time. These both come from his astonishingly good 2011 Harlem River Blues album, equally worth checking out if you haven’t by now.

He performed as a 3 piece band this time, rather than going solo as on his previous UK tour. His songs are honest, fearless and often raw, and reflect his ever always changing and evolving musicalstyle. His influences are clear - he cites Woody Guthrie, Hank Williams et al -he does not cite his father Steve Earle but then he doesn’t need to. He talks (and hauntingly sings - in Mama’s Eyes) about how his father abandoned his mother when he was just 2, and how that shaped, or more accurately misshaped his growing up. Judging by some of his lyrics he may not have totally taken the lesson about how not to treat women into his own adult experiences, but then that wouldn’t make for a good country song.

The highpoint for me was his rendition of Am I That Lonely Tonight – it is achingly sad with its lyrics exposing such vulnerability and pain.  This was another transfixing and extraordinary performance by JTE. But just a note to would-behecklers, it’s not clever or polite to ask him to play one of his father’s songs, as he angrily retorted – ‘he doesn’t play my songs and I don’t play his’.He is all about Justin Townes Earle, and believe me that is more than enough. 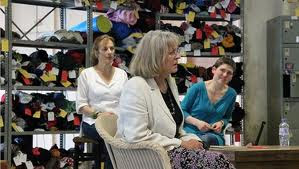 I am a real fan of the Library Theatre’s adventures in different venues while it waits for a permanent home, and absolutely loved Hard Times in Murrays’ Mills last year. This time it’s a modern office block in the shape of Number One First Street, usually full of Council workers, but temporarily also housing a strange kind of Lost Property Office.

Manchester Lines is a bit like a collection of short stories, all with the theme of loss. John Branwell is fabulous as Eugene, the manager of the Lost Property Office, who finds himself as much a keeper of lost souls, as any practical part of his actual job description. There are some lovely and very touching performances, especially Anne Kidd as Jessie, the elderly woman with dementia who forgets everyday details but who is haunted by the baby daughter she gave away years before. And Claire Brown as Pauline, the grown up version of the baby who was adopted, and who seems to be developing some of the same frailties as her birth mother.

My favourite part was played by Tachia Newall as Omar, a young West Indian man, who keeps on losing his umbrella, perhaps to encounter Eugene all over again. He is really very talented and very funny in his portrayal of this warm but needy character. And special mention also must go to Marcquelle Ward as Pauline’s teenage son Louis - definitely one to watch.

But sadly, I don’t usually find short stories satisfying enough for my appetites, with a few notable exceptions like Chekov, who I have recently discovered to my joy. They leave me feeling hungry for more and a bit short changed. And that is an apt way to describe how I felt after seeing this play. The stories of the characters didn't all knit together too well, resulting in an uneven story.

It is a great setting and they have made use of some lovely props, and packed it full of local references, but overall this felt like something of a missed opportunity. The musical numbers were not quite strong enough, although the actual singing was lovely. And a great choir was underused – and only came in at end. It isn’t really a promenade production – the only walking bits are on the way in and on the way out.

Some of the more poignant stories of loss and kindness suffered for other  elements being a bit too telegraphed, and lacking in the subtlety needed to be more meaningful and  hard hitting.

Posted by Julia at 17:15 No comments: Links to this post This has got to be the weirdest gig I have ever been to. I am still not sure if I loved it or hated it but it was certainly entertaining. The setting was the intimate Kraak club, tucked away down a nearly blind alley in one of the less salubrious parts of the Northern Quarter. And David Thomas Broughton created a cacophony of sound via recording trickery and echoing mikes.

He looks very unassuming, dare I say ordinary, but he is anything but mundane. Broughton is obviously not at home conversing with an audience – he turned his back to them for parts of his performance and there was no interaction with or even acknowledgement of the audience to speak of throughout. Although to be fair there were no breaks in the performance to allow for clapping or otherwise until the very end.

He is a very unusual performer, to understate the case somewhat, with a unique vocal sound, reminiscent of avant-garde performers like Laurie Anderson or Yoko Ono. It did all feel a bit New York, with a Yorkshire accent. Broughton is clearly an eccentric genius, who wanders around the audience singing and gesticulating.

I couldn’t tell you how many songs he performed- it wasn't always clear when they started and ended. I did partially recognise some snippets from tracks from his ‘Outbreeding’ CD, although to be fair he didn’t play some of my favourites, like ‘Apologies’, or ‘Joke’. He has a beautiful and original voice, and writes some fabulous lyrics. He is also clearly an accomplished musician. But seeing him live is something else altogether. David Thomas Broughton is bonkers and extremely baffling at times, and eccentric in a good way (I think!). Go and see for yourself – you won’t see the like anywhere else I can assure you.

Posted by Julia at 19:58 No comments: Links to this post