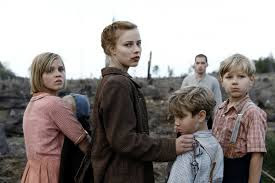 It's unusual to tell a story from the point of view of Nazi sympathisers, but in Lore, that is exactly what director Cate Shortland does. The film, based on a book by Rachel Seifert, begins as Hitler has just committed suicide, and so ended the hopes and dreams of world domination by his followers. Specifically, this film explores the point of view of the children of Nazis, innocents to a degree, but who have become imbibed with the dogma and prejudice of their parents.

Hannelore, the Lore of the title, is left to cope as her father and mother have fled to avoid capture by the Allied forces sweeping through Germany. She struggles against all odds to lead her younger brothers and sisters to her grandmother's house in Hamburg. Saskia Rosendahl gives a tremendous performance as the young girl, with so much responsibility put on her shoulders, including a baby brother whose constant cries for food are heart wrenching.

She is saved from capture by the benevolent intervention of a Jewish boy, played by Kai Malina, who pretends they are his family. It is fascinating viewing to see Lore struggle with her deep seated contempt and loathing for Jewish people, but her bond with the boy grows in spite of this.

Lore is a dark and brooding film, with no easy answers or glib happy endings. It is not exactly an easy watch, but definitely worth it for the strong performances of the young central characters.